What are the core muscles and why do you need to know?

The ‘core’ is more than just your ‘abs’…

Lots of people tell me they want to strengthen their core – for overall strength, to support the lower back, and to tone the whole tummy area.

To really strengthen and target your core, I have found it incredibly helpful to understand what muscles make up the core and how they coordinate.

We are all familiar with the ‘abs’, or muscles along the front of the torso, but there is a whole team of muscles which create our core stability and strength. Having a picture of the key muscles and how they all coordinate helps to build overall body awareness and brain connection to your trunk.  The good news is that we work and challenge this muscular team in so many yoga poses and movements. Regular yoga can really help to build confidence and a sense of support from your trunk for all your everyday movement.

What is the core?

The muscles of the trunk can be divided into an ‘inner’ and ‘outer’ core. Of course, they all work together constantly as we move, so this is an artificial (and debated) distinction, which we are using to help us understand a complex system.

The ‘inner’ core muscles can be described as a cylinder of muscles of the lower trunk, with the diaphragm at the top, the pelvic floor muscles at the base, the multifidus muscles at the back along the spine, and the transversus abdominus wrapping around from back to front like a wide corset. Often the psoas muscles is also included as part of the inner core, running diagonally from top to bottom and back to front, wrapping around and holding it all together. 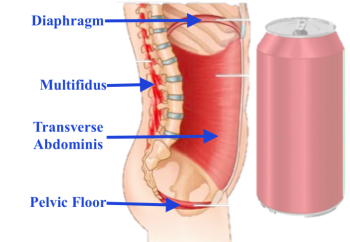 The ‘Inner Core’ Cylinder of Muscles

Another representation of the inner core, including the Psoas muscle. 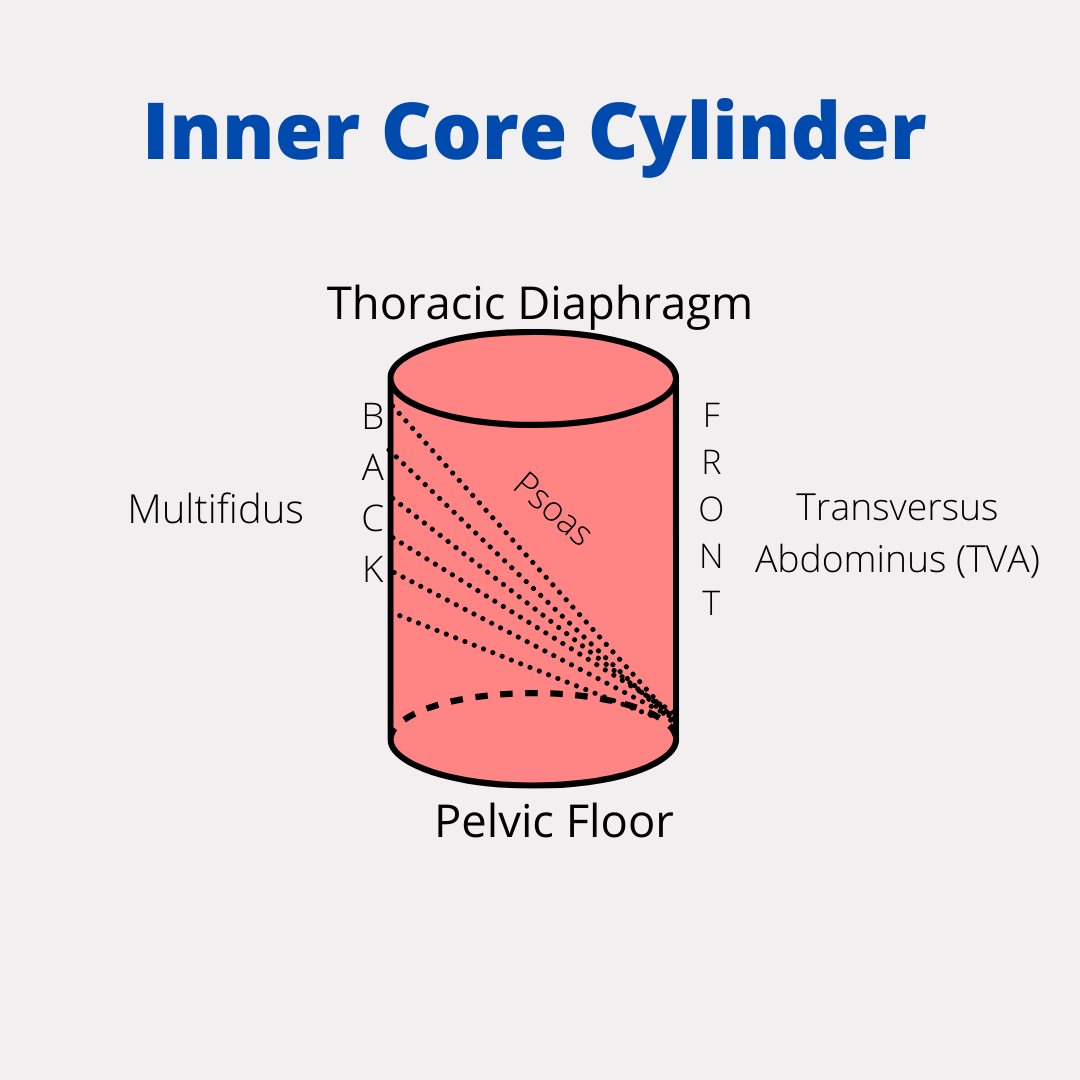 The Role of Breathing in the Core

A key thing to note is that the top of the ‘inner’ core cylinder of your abdominal cavity, is the diaphragm, your main breathing muscle. The diaphragm is a circular-ish dome of muscle, attaching all around your lower ribs and to your spine at the back. It expands outwards and downwards on the inhale (pulling air into your lungs), and moves back up into a dome shape on the exhale.  You could try holding your lower rib area, and see if you can visualise and feel that movement.

How the Diaphragm moves on the inhale and exhale

All together the coordinating muscles of this ‘inner core’ cylinder expand and contract as we breathe.

At rest, the firming toning is really minimal as it isn’t required, so might be hard to feel. You can more or less feel this core tensioning when you sneeze or cough and feel firming in your trunk. Or if you imagine lying on a sofa and a puppy is about to jump on you. That reflexive tensing is your core, a combo of inner and outer!

We can practice this ‘core engaged’ feeling in movement and under more demand/load. You are strong and supported on the inhale as the abdominal cavity pressurises (think of a full coke which you can’t squeeze) and as you exhale slowly, the cylinder walls (think of your ‘corset’) contract concentrically (shorten) to maintain that support, and the pelvic floor tones.

The ‘outer’ core is all of the more outer layers of muscles which we use more in three dimensional dynamic movements, (when the trunk and spine isn’t holding firm and straight-ish) – the layers of oblique muscles move us into sidebending and rotation, the rectus abdominis or ‘six pack’ along the front of the trunk move us into flexion or bending forwards and rotation.

Muscles of the ‘outer’ core 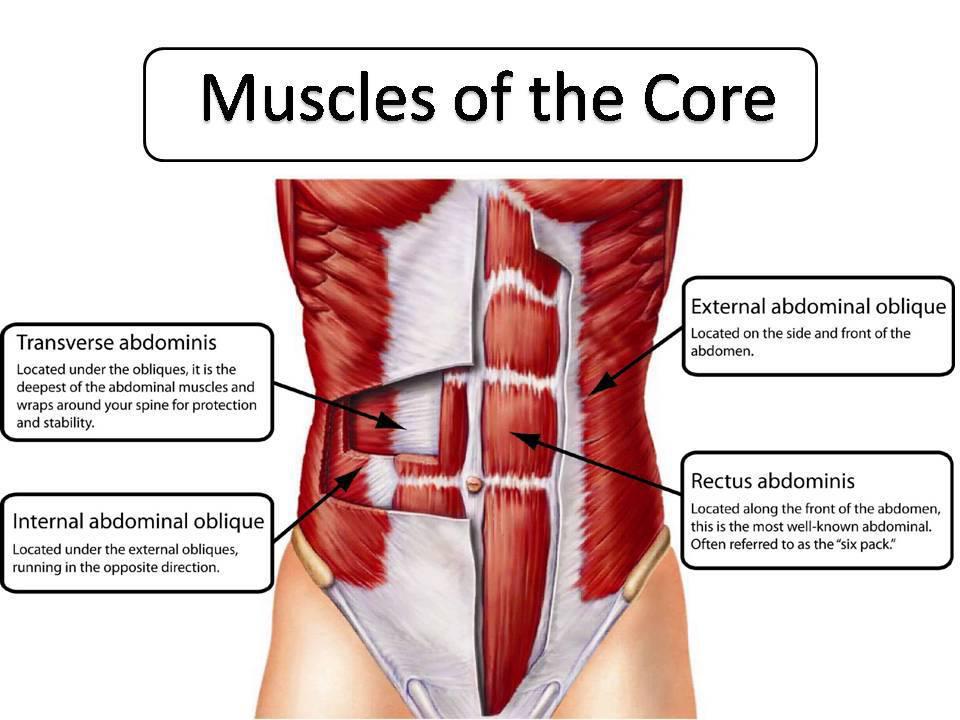 The Muscles of the Outer Core

(You could add other supporting muscles – around the hips, gluteus maximus (buttock muscles), the quadratus lumborum along the lower back, to name a few. 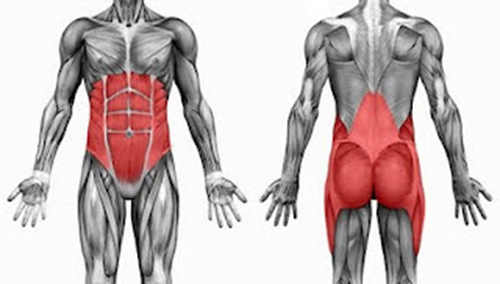 How the core creates strength

When load (weight bearing) requirements increase (e.g. picking up a heavy box, or shifting from down dog to plank, lifting up into a headstand), the firming response in the trunk increases reflexively. Yes, you can train this strength, but note that it is perfectly designed to work on demand. So what feels like a weak core is often a matter of challenging your core with load,  consistently and progressively. Yoga is great as part of this strength development!

My definition of the core:

So to keep it simple, your core is how your trunk creates enough support or ‘firmness’ in movement for you to have a wide range of movement options – both holding your trunk still and stable and moving your limbs around, and also bending/rotating your trunk in various ways in dynamic movement.

There might be a broad idea that the ‘inner core’ works more for stability to hold the spine and trunk firm and still as the limbs move, and the outer core muscles create 3-D dynamic movement, like bending and turning etc, but its probably more accurate to consider that all movement involves complex muscular teamwork, so its probably never that clear cut which muscles are joining in! Especially in complex, whole body poses and transitions like we do in yoga.

This is a super simplified ‘useful to know’ guide to the core, so please do come back to me with any questions and comments. Have you found this info helpful?

I hope now you are excited and feel well prepared to try out some of the core yoga moves in the next blog, ‘How to Strengthen your Core with Yoga’,  coming up next.

You could also sign up to my newsletter here for regular ‘subscribers only’ free practice videos,  which includes tips on strengthening your core.

* For a more complex sounding but widely accepted definitions of the core:

Page load link
We collect cookies and anonymous data via Google Analytics. Accept to continue or switch to private browsing to use this site without data being collected.
Read our Privacy and Cookies Policy for more info. OK
Go to Top